This weekend was my 5 month expat-iversary in the Netherlands… so what better to write about than another one of my passions… Japanese food! (Btw: yes, I get that most people would celebrate their 6 month “anniversary” but 5 is my lucky number and I am not most people!)

Before I start, I probably don’t say it here much (if at all… I’m not that kinda girl) BUT the last 5 months have been HARD! I won’t lie. Fellow blogger Sophie in Clogs summed it up perfectly in her advice to newbie expats: “…the first few months will be wonderful and frustrating and overwhelming and exciting and lonely and just plain weird – a true roller coaster of emotions.” True, true words! Thanks, Sophie – I couldn’t have said it better myself!

On Friday I was in desperate need of cheering up, so we decided to go out for a meal. And what better than a belly full of sashimi?!

Even before we arrived in Holland, I had already been checking out Trip Advisor to find the best local eateries… and lucky for us there are five Japanese restaurants in Hilversum! We’ve now tried four of the five, and who knows… maybe we’ll try number 5 this month! (Dutchie: nudge, nudge, wink, wink.)

So if you’re a fan of Japanese cuisine, here’s the lowdown of what’s on offer in Hilversum…

A chain, yes. But don’t judge! We’ve eaten here once and had takeaway delivered 2 or 3 times. It is always spot on! The sashimi salad is the shining star of this restaurant: copious amounts of tuna and salmon with a delicious (and slightly spicy) salad dressing, crisp, salad, all finely sliced. The salad of champions! (Bottom right.)

The portion of edamame beans is epic! Well worth the 5 euros. (We actually took half of them home in a doggy bag as there were so many!) The other dishes are crab and prawn “balls” (but more like discs) and spicy tuna maki! Yum!

Sumo restaurants offer “all you can eat” or  a la carte… as we are massive sashimi fans we went a la carte as sashimi isn’t included in the all you can eat menu. (You can buy it for an additional €12.50.)

A great restaurant and well deserving of it’s 4 out of 5 stars on Trip Advisor.

Have you visited other Sumo restaurants in the Netherlands? How did they match up?

Located on Havenstraat, this restaurant has a great relaxed atmosphere and the staff are super-friendly. I love this traditional Japanese mural – beautiful!

They also get bonus points for the amazing wine glasses!

A big advantage at Tokyo is you can buy 4 maki rolls instead of the standard 8. This is great because it means you can two different varieties at once: a big advantage for us!

They also serve their sashimi platter ON A BOAT!! 😀

Simply fabulous! A great authentic restaurant… I can’t wait to go back!

Sorry to say, but: best avoided. Truly disappointing. The staff were friendly but the food just wasn’t up to scratch. We ordered a sashimi platter which was said to contain 7 different types of fish. It arrived with four, one of which was crabsticks. The tempura was soggy and very basic (no fancy veg or prawns, just standard veg.) The wasabi was discoloured and weak. If the wasabi is good… you should NOT be able to do this: 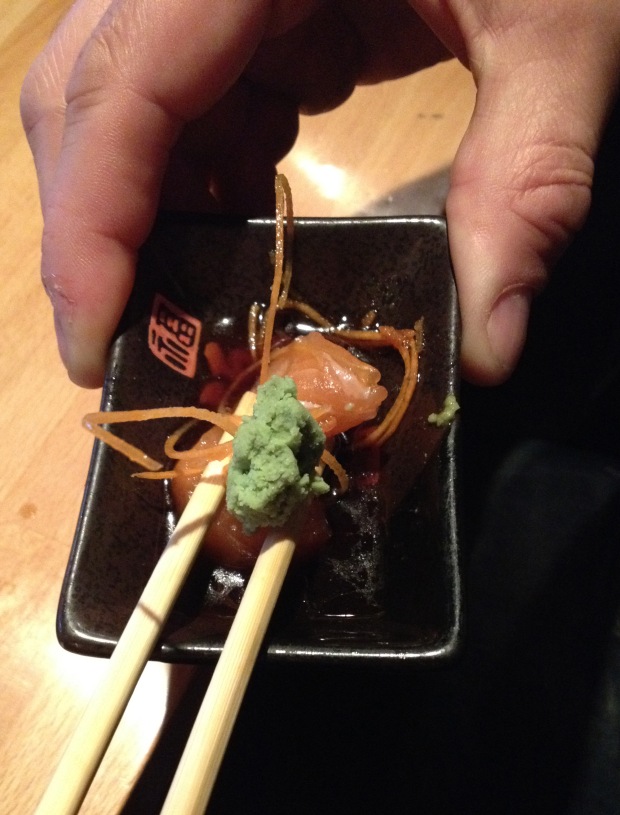 …without getting the world’s biggest nose-kick. This amount: nothing.

Hopefully they were just having a bad day and a low-stocked kitchen… but it was enough for us to not want to go back again.

This is the one we haven’t tried yet… but soooooon! Located on the Groest, next to Sumo! (Keep your friends close and your enemies closer and all that!) They offer lunch, take out and dinner (but are only open until 8pm, which is why we haven’t been yet.)

This was the little gem we discovered on Friday! As you can see – the bar area is stunning!

We had two soups to start but they didn’t photograph well in the romantic candle light! 😉 Miso soup (simple, good) and a Japanese fish soup (highly recommended!)

Then we had tempura, sashimi, edamame beans (of course!) and Usuyaki (beefrolls met knoflook en lenteui = beef with garlic and spring onions) with udon noodles. Definitely the dish of the day!!

The staff were welcoming and nothing was too much trouble. When we asked for more wasabi (heat fiends that we are) the waiter happily brought back a huge pot (well, huge for wasabi, anyway!)

Hilversum gets a big thumbs up for its Japanse restaurants!

What great restaurants do you have in your neighbourhood?