Over the last year and half I’ve received quite a few emails asking me about how I learnt Dutch. Note: I am still learning!!

But anyway, I thought I’d share how I am learning Dutch with you guys. I hope it’s helpful for any of you who are being challenged with this difficult language. I feel you!

My first port of call was Michel Thomas because my Mum and Dad were learning French at the time via the Michel Thomas method and had highly recommended it. (As do I!)

Both the Foundation and Advanced course are very good, however they will not suffice (alone) in teaching you Dutch! But they’re great for beginners to get a feel for the language and the pronunciation etc.

Oh and because I’m a food nerd, my sister-in-law cleverly bought me “Your 1000 Most Important Words: Food and Drink”.

Secondly, I got my hands on EVERTHING Dutch I could. Dutch textbooks, grammar books, children’s books. I mostly ordered these from Amazon UK as I was still living in England at the time. As I was buying so much, I got the majority of them second-hand. 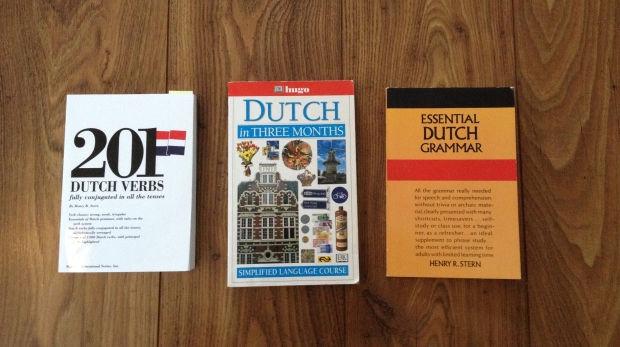 For me: the “201 Dutch verbs” is an absolute must! I use it loads. Hugo “Dutch in 3 months” is also a pretty good textbook, except that I’m not even halfway through it. If you are more dedicated than me, it’s a good ‘un!

Most of these were lent to me by my schoonmoeder (mother-in-law). I also bought a few myself at Bruna (a chain in the Netherlands – a bit like WH Smith).

I use the really simple ones for pronunciation – I read to the Dutchie and he corrects any errors. Then I read the slightly higher level ones with a dictionary next to me! (The same as I do with magazines.)

The two I’ve tried are Duolingo and Babbel. I recommend both of them. Duolingo is free – but it does have a few annoying quirks. I see people complaining all the time on the FB group… things which they think are right but Duolingo says are wrong and about the speaking/microphone settings. I found that speaking slowly and loudly helps with that! (Typical English person, eh?) But really, you have to otherwise the programme marks your answers as wrong. I’m pretty sure they have an app too, but I haven’t used that.

Babbel is more visual/text based. You pay 20 euros for 3 months and you can use it as often as you like. They also have a phone/ipad app which I found useful on the go.

I did an intermediate course at my local college as soon as I arrived in Holland. This is obviously one of the best ways to learn – as you’re thrown in at the deep end! Unfortunately… our teacher was rubbish. Sad face.

It did mean that I had to speak Dutch in class for an hour and a half each week though… and do homework every week. So that was great for continuity… (even though every single bloody week I did my homework in a rush – half an hour before class – whilst eating dinner. Some things never change!!)

At my local college they used the “Delftse methode” which is a pretty good course, though the books are VERY old fashioned, despite being published in 2007…

As I’ve already mentioned before, there’s not a lot to write home about with Dutch TV. But pick a subject you’re interested in and hopefully you can find something tolerable. For me that’s MasterChef Holland. (UK Masterchef is the still the best, Australia second and Holland third. The rest suck.)

I used to watch Pim & Pom, a children’s programme about two cats. There are tons of kids programmes available on cable (we have Ziggo) but I couldn’t stand most of them as the voices are too annoying. However, if you can – watching kids programmes is a really good way to learn basic words, sentence structure and pronunciation.

Kinda the same deal as with TV, but there are a few gems: Gooische Vrouwen (also a TV series), Dunya & Desie (totally a teener film, but hey, I like Clueless!), Jackie, Alles Is Liefde, Alles is Familie.

Even if it’s on in the background, you’re still exposing yourself to the language. My favourite stations are 3FM, Sky Radio and Radio 538. And at Christmas time… NPO Radio 2! (Because of the Top 2000.)

This seems so obvious, but of the whole list… this is the hardest one to pull off!

Here’s the thing with learning Dutch: you speak Dutch, they hear an accent, they switch to English.

There’s only one way to rectify this. You have to be more stubborn than a Dutch person… and believe me, they’re pretty stubborn.

The whole switching to English thing doesn’t happen to me that much anymore (thankfully!!) but occasionally, it rears its ugly head. When this happens you have three options:

I do find stubbornness wins out… most of the time anyway!