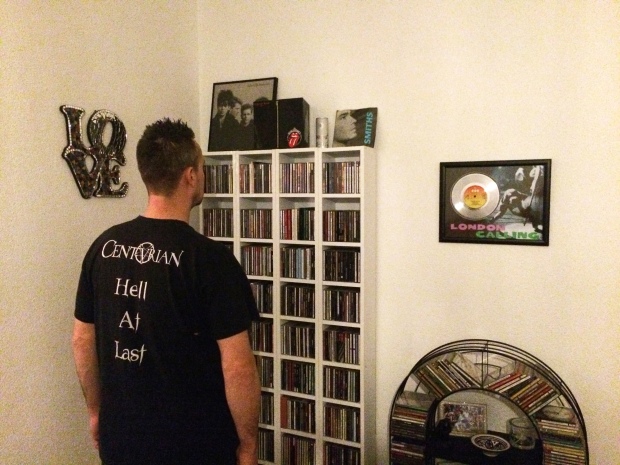 In his natural habitat

Maybe it’s just me (and I suspect it isn’t) but when I’m reading a blog – and I read a few – I’m always curious about the author’s partner. You could politely just say I’m a curious person, but like a lot of people, let’s be honest: we’re just nosey!

Bloggers partners usually get mentioned in their blog (a lot) but you rarely get any more information than that. One of my favourite ever posts on a blog was a post her husband had written about her. It was just so refreshing to see his take on things and I’m pretty sure it made me cry, it was that beautifully written.

My husband, aka The Dutchie, isn’t that guy though. That’s not his thing. He doesn’t do slushy or soppy and that’s fine too… so instead, I did a mini-interview with him to celebrate my 100th blog post! As my number 1 fan, he deserves a bit of appreciation! 🙂

Where were you born? And where did you grow up?
I was born in Amsterdam. I lived in Bovenkarspel for the first 6 years of my life and then we moved to Huizen in ‘t Gooi. After that I lived in Amsterdam for a few years before moving to Hilversum. From there I went to England for 3 years and now we’re back in Hilversum.

What do you do all day?
I’m an SEA Consultant. So if you see paid adverts at the top of Google results, that could be me. And if you’ve visited a website and are (annoyingly) followed around with banners… that’s what I do as well.

Favourite Dutch food(s)?
Vlammetjes. Preferably on a platter along with bitterballen.

What Dutch dish do you think everyone should try while here?
We’re not known for our great food, but I think everyone should go to a Febo or a different ‘eten uit de muur’ (eating from the wall) place and get some kroketten and other random stuff that’s in it. Make sure you’re not that tourist who opens an empty slot though!

What is the one thing you recommend someone does on their trip to Holland?
If you’re in Amsterdam on New Year’s eve – find a rooftop to party on. The 360 degree fireworks at midnight are absolutely unbelievable (don’t even try to imagine). I’ve seen many English friends literally get tears in their eyes when they’ve been there.

What is it like being in a relationship with someone from a different country?
Fun and sometimes difficult. Fun as in I love the English culture and I’m in the middle of it. Hard because apparently the Dutch come over very rude and sometimes (for me) I’m acting normal and am being accused of being very rude. <Editor: He is rude. But he doesn’t mean to be. We’re still working on that one…>

What do you most miss about England?
The pub culture. And more specifically, being able to chose from different types of cider from draft and bottle in any random pub. Every pub I went to in England has a selection of cider. Here you’re lucky if they have one brand, and then it’s Strongbow!

Favourite place in Holland?
Out on the water in Vinkeveen. My best friend has a boat.

What is your favourite trip we have taken together?
Mojacar, Spain. As a country I’d say the trip to Thailand – but so many crazy things happened in Mojacar and it’s the first and most likely the last time I’ve had success with karaoke. (I’m not known for my beautiful singing voice!) I sang Pulp – Common People.

How about your least favourite trip we have taken together?
Hmmm… I guess Brugge <Editor: He’s Dutch, he means Bruges.> when all the bars and restaurants we wanted to visit were closed. And actually the whole city was dead for some holiday or something.

Best song ever made?
Roxy Music – If There is Something. <Editor: This song was played at our wedding.>

Best gig you’ve ever been to?
Sonic Youth. Pukkelpop 1990 or something. Gig doesn’t completely cover it, the whole festival was amazing: The Pogues, Ramones, Nirvana (before Nevermind), Frank Black, Ride, Dinosaur Jr.

First tape you ever bought?
**Laughs** Yeah yeah, I’m old! I’m too old to remember the first. The first I remember is Depeche Mode – Black Celebration, but there must be ones before that.

Favourite TV show?
Masterchef. (Or MotoGP if you can call that a TV show.)

What’s your special talent?
I guess I have to say pingpong. And I deliberately say pingpong as people who take it too seriously call it table tennis. <Editor butts in again: He’s being ridiculously modest here! He plays in the 2nd division in Holland and in the UK he played regionally. He’s good. Really bloody good.>

Anything else you’d like to know about The Dutchie?

Comment below and I’ll get him to answer any additional questions 🙂 Today is your chance to be as nosey as you like!!

Langkawi sunsets will take some beating ❤️🧡💛💜 Enjoying my last 2 days here with @k8j83 💕 So lucky to have you here!!! What a way to end my trip👌🏻