If you’ve been following the blog for a while, you’ll know that I was lucky enough to win the AngloINFO & British Corner Shop #HomeComforts competition back in November.

As my prize, I won £100 to spend on British groceries, delivered to my home in the Netherlands, for a WHOLE YEAR! I can safely say that it’s the best prize you could ever give to an expat. EVER!

Now obviously, there are some things I miss which money can’t buy: my friends and family, people saying sorry all the time, our sense of humour, traditional British pubs and of course… our beautiful landscape. There are HILLS and everything! 😉 But thanks to the British Corner Shop, I now have the contents of a British supermarket to comfort me in between my visits ‘home’. So here’s a sneak peek of what you can find in my online shopping basket…

Marmite has to be top of the list for me! You either love it or you hate it – so I speak for at least 50% of British expats here. Best on toast or crumpets. Mmmmmm…. crumpets!

This one isn’t so tough here in the Netherlands, you just have to put a bit of effort in and make your own… but I imagine for some expats it could be difficult to get your hands on all of the key ingredients. *Sob*.

That fizzy, foamy stuff you drink – technically, that’s lager. English folk drink ale – the room temperature, flat stuff. Want to know the difference between lager and ale? Cider: Ok, so there is cider in Holland: Jillz and Strongbow, but that’s about it. In the UK there are 480 Cider Makers (source). Resulting in hundreds of cider options, and a whole dedicated bay in the supermarket, from traditional scrumpy and fruit flavoured ciders, to the more modern brands like Magners and Gaymers.

One word for you: cheddar. Two words for you: Dairylea Dunkers. (Ok, so the second is probably just me.)

Searching for supermarket lamb in the Netherlands is like searching for a kangaroo in the Antarctic. Once I found lamb sausages (huh??) … once! They’ve since disappeared from the shelves. You see, lamb is a key ingredient to many of our traditional dishes – so an absolute must! Minted Lamb Steaks, Rack of Lamb, Lamb Stew, Shepherd’s Pie and of course Lamb Curries! (Not technically British of course, but curry is hugely popular in the UK!)

Beans… sauces… soups. You can get baked beans here in the Netherlands – and if you’re lucky, even tomato sauce. But the soups haven’t made it over here yet… How else is a girl supposed to survive the winter without Cream of Chicken?

Yes, they have crisps in other countries… here in the Netherlands the standout is paprika! BUT, ask any British expat and you’ll get the same answer: they’re not the same. British crisps are just something else. Go to any large British supermarket and you will find a whole aisle dedicated to crisps and savoury snacks. Sometimes even two! And for some reason, no other country finds salt & vinegar crisps as delicious as we do! There’s no accounting for taste…

DAIRY MILK and GALAXY. When you’re homesick: no other chocolate will do!

That wafer thin stuff you get at the slagerij (butcher) called spek (bacon)? Just because you call it bacon, doesn’t mean it is. British bacon comes in slabs! Thick and meaty. ‘Nuff said. 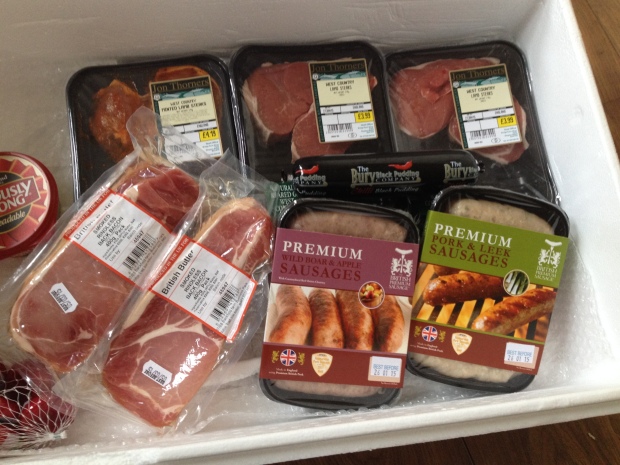 And what do Dutch expats miss most when they’re abroad?

According to a survey by Dutch television station BVN, top of the list of items missed by Dutch expats is herring! Some 9% of those polled said they missed the herring most of all, followed by kroketten (8.6%), cheese (8.1%) and household goods chain Hema (8%). Family and friends came in only fifth place, with 6.7% of the vote, followed by cycling (6.5%), Dutch bread, cakes and biscuits (2.7%), the warm atmosphere (2.2%), Sinterklaas (2.1%) and things to eat on bread (2.1%). Source: DutchNews.nl.

What do you (or would you) miss the most if you live(d) abroad?