It’s nearly 3 weeks since we got back from our honeymoon and I write this with serious post-wedding / honeymoon blues! BUT: time for Part 2! The Stelvio Pass. Oh My Life.

I would love to be mysterious, to build the suspense and keep you waiting but I just can’t! It’s too exciting! I now see what all the fuss is about on Top Gear,  motorbike forums and whatnot. It’s the best road I’ve ever experienced, a real drivers road and I will never forget it. (Yes, I am getting excited about a ROAD. You’ll see…)

The Dutchie summed it up perfectly… posting this panorama on Facebook with the caption “The drive of a lifetime”. Boy was he right.

Unfortunately, this is the only picture you’ll see from the Dutchie… while his photos can be restored, the price tag is ridiculously hefty… so for now at least we’ll have to go without. A massive shame that he has lost hundreds of photos (including the beginning of the honeymoon.) Damn.

The idea of going via the Stelvio Pass (in Italian it’s called the Passo dello Stelvio and in German: Stilfser Joch) came from one of the Dutchie’s work colleagues. He’d recently been on a similar road trip and said it was well worth a detour. Yep. Yep. Yep.

There were tons of  brave cyclists tackling the pass. At 21.5 km long with 48 hairpins… that’s no mean feat!

The pass is located in the Ortler Alps in Italy between Stilfs (“Stelvio” in Italian) in South Tyrol and Bormio in the province of Sondrio, Lombardy, Italy. It has an impressive elevation of 2,757m (9,045 ft) above sea level!

The views are absolutely breathtaking! We stopped to admire them at pretty much every opportunity we could! There are several parking places for cars, some more hairy (scary) than others! The advantage of cycling is that you can stop wherever you like. Maybe not so insane after all. 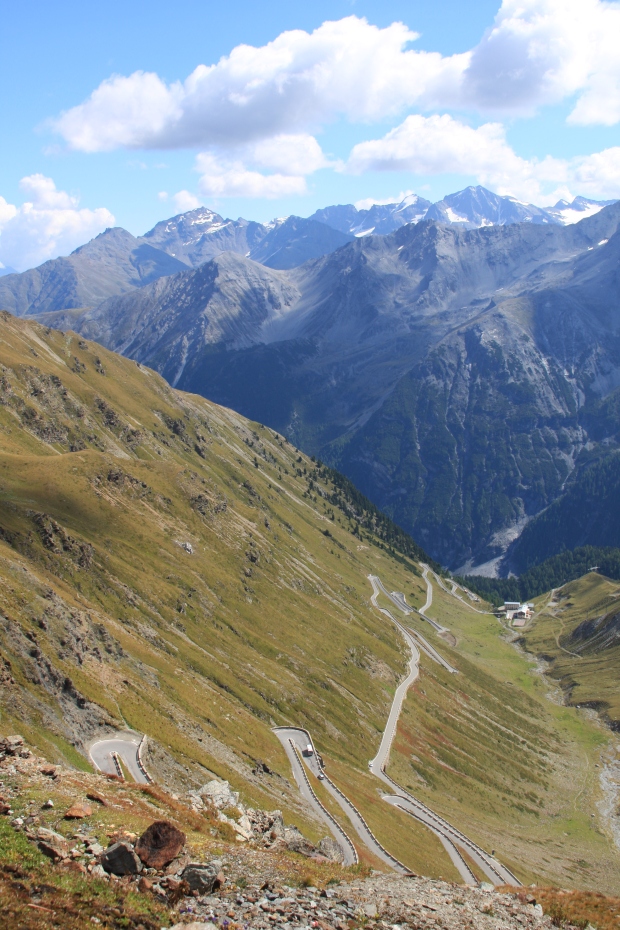 … and out the other side! This was taken just after the small town of Bormio, a popular skiing destination in the Alps.

An amazing start to the trip and highly recommended if you’re going to Northern Italy!

I’ll end with a couple of tips if you’re going to the Stelvio Pass yourself:

Oh, and if you don’t speak Italian… take a phrasebook or a dictionary!! Few people speak English so if you want to be understood, you’ll need a little help! (You’ll thank me later.)

Part 3: Lake Garda! Have you been?