King’s Day (formerly Queen’s Day) is my favourite Dutch holiday and this year I just happen to live here, so it’s double spannend!

A little bit of history:

King’s Day celebrates the birthday of the King, Willem-Alexander and is to be held annually on the 27th of April (or the 26th if the 27th falls on a Sunday – like this year). 2014 is the first ever King’s Day in the Netherlands. Formerly Koninginnedag (Queen’s Day), last year saw the inauguration of King Willem-Alexander on 30th April 2013 – the last Queen’s Day following the abdication of Queen Beatrix. (Full story.)

So now, it’s ALL about the King!

Apart from the name change, I’m expecting the same level of enthusiasm, atmosphere and celebration in Amsterdam as the past 3 years I’ve attended!

So what happens on King’s Day?

Basically everyone goes oranje gekte (orange crazy) … lots of people will be dressed head-to-toe in orange! Even the more modest will wear at least something orange. Some people even dress their pets in the colour. Seriously.

It’s all a show of pride for the Dutch Royal family, the House of Orange-Nassau… and man are they proud!! 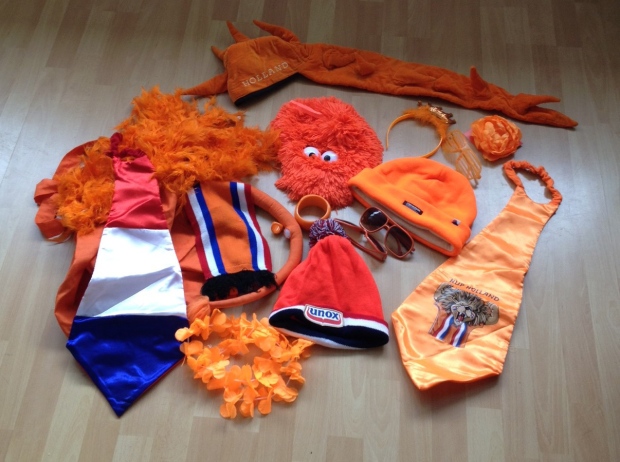 Our King’s Day accessories box. Every Dutchie I know has their own collection of orange memorabilia for special occasions.

The whole of the Netherlands is a massive party on this day, but nowhere more than in Amsterdam! The main roads are closed off to cars and trams so that crowds can party in the streets and there’s live music, LOTS of booze and an electric atmosphere wherever you go!  You could even call it gezellig! 😉

What should I bring?

In addition to your orange get-up:

1. Loose change. Make sure you have plenty of loose change as many toilet facilities charge between 50 cents – 1 euro to use their powder room on King’s Day.

2. Comfy footwear. You will do a lot of walking and/or dancing – so wear comfortable shoes!!

3. Beverages (and money for more beverages!) Strictly speaking, you must not carry more than one alcoholic drink with you but I have never seen this enforced.

4. Camera. You will obviously need a camera to take #selfies of you and your mates having an awesome time (yes, I am taking the piss)… I am way too old for selfies or hash tagging.

5. Phone = pointless unless used for number 4.  You can try to use your phone… but it won’t work. Generally the networks are as crazy as the parties on King’s Day.

What can I expect to see / do?

Well that’s up to you of course! There’s plenty, believe me!  Just walk around and you’ll find parties of all sizes and description, live music, fun attractions, games and general drinking and merriment.

Vrijmarkt: If you want to buy some old tat, or just soak up a great atmosphere, head for Vondelpark. Special rules on King’s Day mean that anyone can sell their second-hand things on the streets and in parks, thus turning the city into a vrijmarkt (free market)! Anyone can take part, so there’s a load of old junk on offer! Vondelpark is swarming with children selling their wares. There’s a buzzing atmosphere in the park, with singing, dancing and children-turned-street performers for the day! There are also a wide variety of stalls and games, from wet-sponge throwing to funfair style games.

Looking in a box cost me 50 cents…

Parties: there are parties all over the city, ranging from small bars with live music acts, to huge organised events (for these you’ll need to buy tickets in advance). Visit iamsterdam for details.

Personally, we just prefer to bar crawl, that way you get to see more of the city and check out various venues before making your choice. A firm favourite of ours is the Kashmir Lounge bar on Jan Pieter Heijestraat with it’s relaxed vibe.

Go around the party please.

Canals: The canals are absolutely heaving on King’s Day, you will probably only see a sea of orange rather than any actual water. It’s all in good fun though and a sight not-to-be-missed. If you’re lucky enough to know someone with a boat, take a boat ride after 8-9pm… the lightweights have drunk too much and will have headed home by then, so it’s much less busy 😉

Maybe see you there. I’ll be the one with the gold tiara, orange jumpsuit and a bottle of orange fizz!