(Making our house a home.)

So, I’m officially an expat. Eek!! I moved to the Netherlands late on Saturday evening so this is my third full day living here. The past two days have been spent unpacking what seems like a million boxes! How on earth we fit all that stuff in a one-bedroom flat is beyond me…

Home is where the tea is.

Naturally, the first thing to be unpacked was the kettle and tea making facilities! Actually the kettle is new, can you tell? 😉

Second on the priority list was our music. The Dutchie and I are massive music fans, so our “CD wall” is one of our most prized possessions!

It was also a quick and easy way to empty at least 10 boxes!! After picture to follow… we need to get our London Calling framed album on the wall first! 😉

After a really early start on Sunday morning we worked hard all day and decided to get out of the house for some fresh air and something to eat about 7pm or so. It’s amazing how you forget to eat when you’re that busy!! We discovered a lovely local kroeg (pub/bar) called Het Cafe van Aemstel. I was confused by Aemstel at first but the Dutchie explained that it’s old Dutch and that the pronunciation is just Amstel – exactly the same. Phew!! 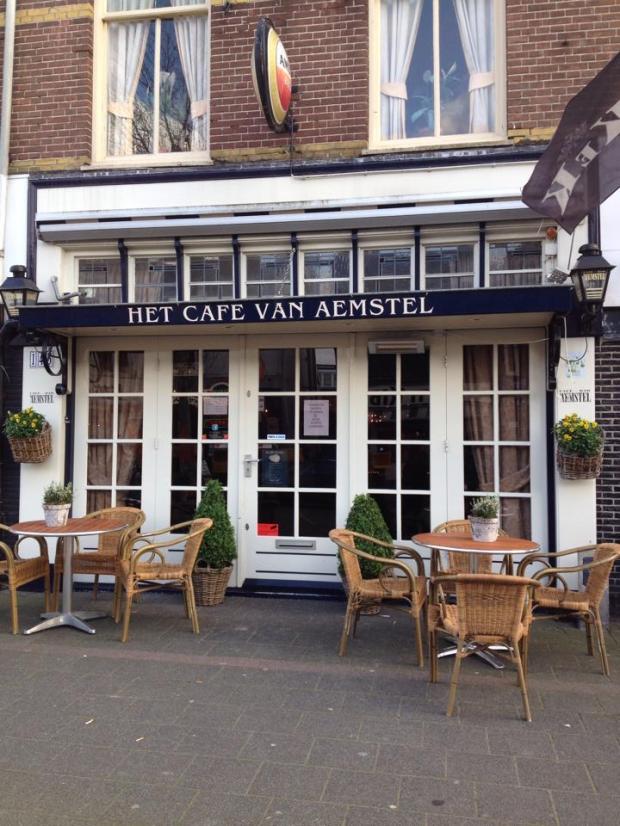 On Monday, while the Dutchie was at work,  I took on the role of Wonder Woman and transformed our house (at least the downstairs anyway!) into a home. Gone are ALL of the boxes and packing stuff and it actually looks like a real home, instead of a warehouse. I worked tirelessly all day and got more done than I thought humanely possible! It was all worth it though to see the reaction on his face when he got back from work – priceless!

The Dutchie’s Mum also came over for een kopje koffie (a cup of coffee) and paid me the ultimate Dutch compliment… that I had made the house gezellig!! If you’re Dutch, learning Dutch or have visited the Netherlands you will know that this word has no direct translation in English. It can be most closely described as cosy, comfortable or homely… but that doesn’t quite do this unique word justice. I won’t go into too much detail as I’ve explained the word gezellig here so you can read more there if you want to. Anyway, it’s a huge compliment and I was so happy that all my hard work paid off.